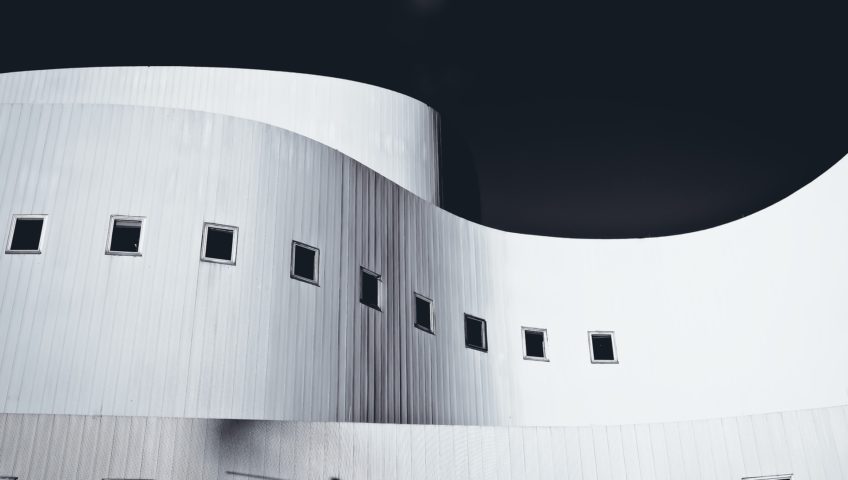 In one of our recent articles, we have been discussing George Nelson as part of our ongoing series on the subject of Prefabrication History. George Nelson was an American architect, writer and designer who wrote extensively on the subject of design. In his book titled How to See (1977) Nelson would advocate the subject of looking at images to be separate to learn discipline. We would like to take this idea of learning to look as a starting point of a new series to introduce to this blog. This series will be focused on physically looking at buildings/images in order to learn more about architecture and related subjects.

Today we would like to discuss images of arches, spherical shapes and waves in relation to the field of construction, as part of our own pursuit of deepening our ability to look.

Arches have been in use in architecture for more than two thousand years. Used in many forms throughout history and today, construction of arches presses the weight outwards hence they are durable and strong. The use of arches is not only advantageous because of their durability and strength, arches are also aesthetically beautiful. The use of arches has become widespread with the Roman Empire and extensively used in order to build aqueducts and bridges. But arches were used earlier than that. Greeks and Romans adapted the use of arches from Etruscans. We could go back even further into the history but instead, we are going to stop here as we will be focusing our attention on arches as part of a group of shapes and objects. However beautiful, today, we are not only thinking of arches but also of spheres, curves, and general shape of a wave in architecture. Let us take a break from art history and focus on the images and structure.

Looking at curves gives our eyes a rest, a non-broken fluidity of information. When looking at an arch or a curve, in an architectural form, our sight is reaching a pause from busy surroundings. We are taken on a route through physical space which is soft and delicate. For our eyes, it is an equilibrium.

A spherical shape in architecture is a symmetrically perfect never-ending curve. Do we look at it as a whole? How do we respond to a spherical shape? We could think of a sphere’s resemblance to the sun and the stars or its use in Hellenistic temples. We could also look at its use in contemporary architecture for its simplicity and its geometrical form. And we would be closer in finding the answer to the question of a connection between an arch, a wave and a spherical shape. We want to look at the images and find this connection. The connection between those aesthetical forms. Equilibrium and softness of those shapes could be part of the answer.

Visually both a sphere and an arch are elegant and harmonious shapes. Spheres, waves and curves can also appear futuristic depending on the context of use, materials used and other shapes accompanying the overall form. Sizes and quantities of those shapes play a big role in how we perceive the overall object.

On the photographs, these forms can be appreciated not only for the architecture but also for the composition. The circles and lines and their positioning are in the essence of forming the elegance in composition. The symmetry or asymmetry of their positioning is crucial. If we look attentively at those lines and curves, we are starting to notice more – we notice the complexity and depth of the form. We notice the elegance. The softness of arches, spheres and waves, when positioned well, next to a perfectly strict line, is the start of a good architectural design. We will continue this subject in another article.